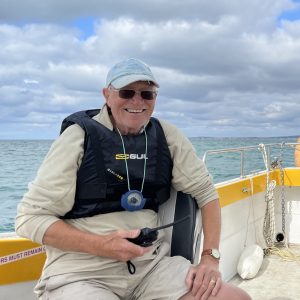 Philip Ayton, club treasurer for the past fifteen years, stepped down from the post at this year’s Annual General Meeting.

Philip has been a member of the club for over twenty five years. When he joined  he shared a Wayfarer with his friend and neighbour Peter Field, and raced in the Wayfarer fleet.  When Peter had to give up sailing Philip crewed for others in the Wayfarers and being fiercely competitive, shared in winning club trophies. Philip has been a champion in his own right being a past British Squash International and latterly Veteran World Squash Champion.

He was Chairman of the club between 2001- 2005.  During this period, he instigated the process of acquiring its first lease on the premises from Shoreham Port, led by Peter Field, which meant that further Club developments could be made with greater certainty. His job as a market analyst in the City made him ideally suited to be Treasurer after finishing his time as Chairman. He also found time to be treasurer of the Wayfarer Class Association and Brighton Marina Yacht Club.

Balancing the books and presenting the accounts is just one part of the Treasurer’s work.  Philip was a progressive in his day to day funding, introducing Member Loan Notes for the larger development projects, for example £30k raised from members to help fund the £75k 2010 building refurbishment project, and most recently with the new Committee Boat. For routine payments, he would give the financial go-ahead on the basis as he said  ‘if it was necessary, Yes, if indulgent, No’.

He has seen many changes to the club in his two decades on the committee and with a steady hand on the finances leaves the Treasury behind him with a financially secure future. He hands over to Rob Rattray as the new Treasurer, however his experience will not be missed on the committee as he will remain as a Trustee of the club and as Wayfarer fleet captain.

These are the words of Nick Le Mare who we asked to summarise all that Philip has done for the club over the years, but we would also like to sign off with a huge thank you from all the committees and members that he has supported in carrying out his role as Treasurer.