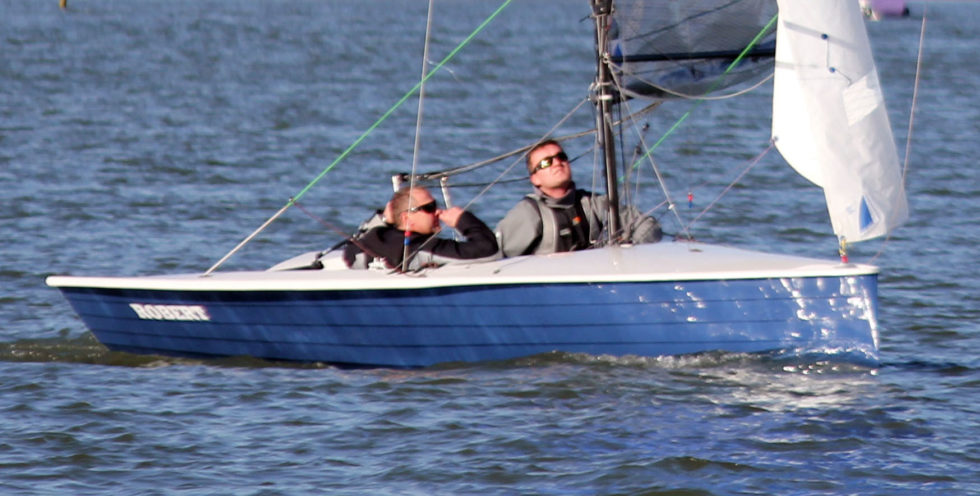 Despite a strong wind forecast and torrential rain the last two races of the Shoreham Cooler series did take place, as thankfully a high tide meant it could be run in the river on a windward leeward course with a reaching dog-leg up the Adur.

Starting on the club line, in both races William Warren and Mark Oakey got away cleanly never to be seen again except by the Phantom of Steve Popple who hung onto their wake and finished only a few seconds behind on corrected time in the first race.

Behind these two a battle royal took place between the merlin’s of Sophie Mackley and James Warren, and Andy Dalby and Will Carroll. These two were only separated on the water by the Phantom of Gareth Griffiths in the first race, beating both on handicap, but in the second race Gareth took an untimely dip to let them both get away and chase down the fireball of Martin Walker and John Piatt who had kept them at bay until the very last drop, which went wrong and they both got through and fought for line honours which went to Andy and Will. On handicap, Chairman Chas crewed by wife Mandy in their Wayfarer took second from Andy and Will, Sophie and James and Martin and John – these four finishing within 36 seconds of each other.

It was an inhospitable day to be race officer and safety crew so a huge thanks to those that stuck it out and made the day possible – Peter Bennett, Alex Warren, Will Rainey, Mark Trott, Paul Wilcox, Gary Inkpen and Mark Elson.

Overall the podium was a Merlin rocket affair, with their two wins on the last weekend meaning that William and Mark won the series from Sophie and James and Toni and Jamie Wright.  The next two spots went to Phantom sailors Steve Popple and Ivan Walsh.