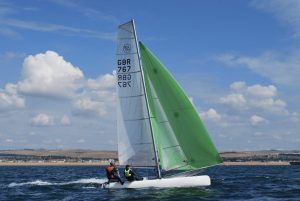 Past Chairman of the club, Paul Wilcock, died suddenly on Saturday 27th November.

Paul was much loved in the club by many members some of whom he had helped with modifications to their boats. His favourite pieces of equipment being a drill, a fid, and a length of mafioli. He was very approachable and quite assured with a keen sense of humour and would talk at length about innovations that could be made to a boat.

He learned to sail as a child in Malta in a dinghy built by his father. At university he sailed a Fireball which he subsequently sold to buy an engagement ring for his wife Marion. He sailed various classes of dinghy, but his most beloved boat was his F18 catamaran. He sailed it for many years at the club, the last eight with his helm and friend Mark Trott who he inducted into the club. As the demands of Catamaran sailing took its toll, he changed from ‘cats’ to monohull and bought a Wayfarer three years ago which he and Mark continued to race together.

Paul became chairman in 2005 and served until 2009. During that time a lot of background work was done on the lease with Shoreham Port Authority, pro bono by his wife Marion, a solicitor. Also, the first work was started on the refurbishment to the downstairs of the club house. He became very much involved with the Improver fleet, advising new sailors how to set up their boats before they went sailing and supervising them from the safety boat.

After his time as Chairman, he helped with various projects around the club including the installation of a winch at the head of the slipway.

When the youth section of the club acquired its own boats, Paul took on the role of bosun. He enjoyed working with young people very much and the youth fleet will benefit from a bequest from him. He had a well-equipped workshop at home with many dinghy spares which he was able to use to make repairs and modifications.

He later rejoined the Committee as Catamaran fleet captain and for a brief time Wayfarer captain.

Paul was a civil engineer by training. He gave up sailing for a while when he and his wife bought a farm. A post graduate degree in the History of Art followed and a change of career to teaching Design and Technology.

He was a great family man, and he will be sorely missed by Marion, their children, grandchildren and by those who knew him.

The funeral will be at Clayton Woods natural burial ground on Monday 13th December at 11.00am (Brighton Road, Clayton, West Sussex, BN6 9PD).