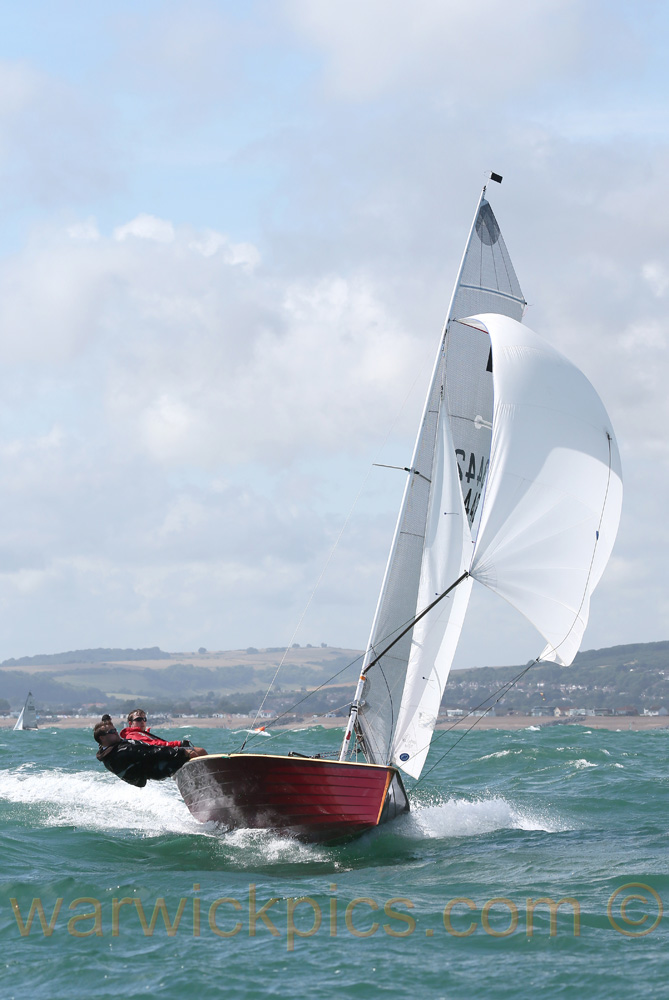 Shoreham Sailing Club welcomed 35 Merlin Rockets for a weekend that was unlike any other they had had at Shoreham, in that it didn’t blow a force five-six with epic waves, but provided beautiful Mediterranean temperatures and light breezes.

Race one got away under black flag in a force 2-3 south westerly in glorious sunshine.  Jon Turner and Richard Parslow lead the fleet round the championship sized course, but having had a head start they never got their gun, handing first place to Dave Winder and Pippa Taylor with Tim Fells and Chris Downham coming through for second, and Richard Whitworth crewed by Sally Townend third.

Race two looked promising as the sea breeze was building nicely, however a large black cloud over Worthing nearly shut it down completely. There was just enough strength behind it to ensure a light and shifty race which was duly won by Whitworth and Townend, with Nick Craig and Alan Roberts second, and the Winder and Taylor team in third.

The evening was spent on the lawns of the club enjoying a fantastic BBQ, beers and the annual egg throwing competition. Joint winners were Tim Harridge and Dave Reid, and Alex Jackson and Simon Haighton.

Sunday’s race three started in an overcast and shifty force 2 from the north/northeast. After the regulation general recall, first to the windward mark was Turner and Parslow, with the consistent Winder/Taylor team hot on their heals, followed by Sophie Mackley and James Warren. These three opened up a lead on the pack behind and finished in that order.

Going into the last race the wind remained in the north. With huge shifts and a strong spring tide there was always going to be trouble at the start. The fleet got away again under the black flag and Winder and Taylor showed a clean pair of heals to the chasers and went on to win by a huge margin, from Andy Dalby and Andrea Ralph in their new ship, launched that weekend. Olly Turner and Alex Warren pulled through to finish third.

Overall this gave Dave Winder and Pippa Taylor the weekend, Silver Tiller and Sunday trophies, with Tim Fells and Chris Downham in second and the very consistent Jasper Barnham and Graham Sexton in third. Saturday’s trophy went to Richard Whitworth and Sally Townend.

Of the Shoreham boats, they finished as follows;

A huge thank you to all the volunteers at Shoreham for running a fantastic event both on and off the water.