Letter to EA, TVO and Mackley

Members who have been to the club recently will have seen that our grounds are more akin to a muddy field than a dinghy park, and our committee have had to resort to writing the letter below to the decision-makers in the Environment Agency, and their contractors Team Van Oord and Mackley, with copies to our Local Councillors, Shoreham Herald, the RYA and the Port.

The letter has already generated some responses and we will keep members updated with further developments. 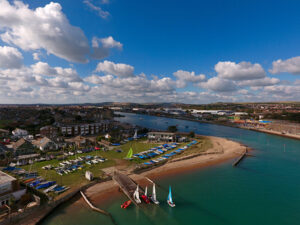 Before work began in 2017 on the Adur Tidal Walls, Shoreham SC was an active dinghy sailing club enjoying a year-on-year increase in membership and income. The club grounds were covered in mature grass (photo 1) which had no areas of standing water, boats could be moved easily across it (photo 2) and there were never any instances of seawater entering the club grounds.

A Notice of Intended Entry was issued to us by the Environment Agency on 20 September 2017 and contractors came onsite on 1 November 2017 with a proposed departure date of 31 March. During the period of occupation regular meetings were help with the contractors and the following concerns were regularly raised by our team of volunteers (email evidence available); 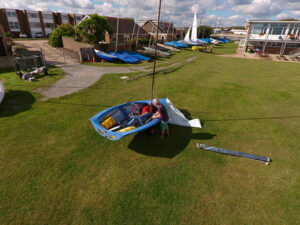 The contractors extended their occupation of Shoreham SC land for a further 15 weeks, until Friday 13 July and provided a temporary launching ramp for access to the water which was limited to 3 hours either side of high water. Additional storage space for boats was provided in a neighbouring car park.

The impact to Shoreham SC of works by Team Van Oord and Mackley on behalf of the Environment Agency are as follows; 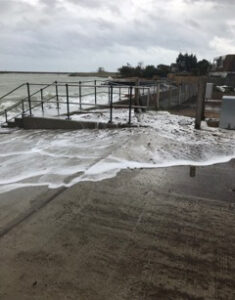 The current situation for Shoreham SC on Wednesday 30 January;

Our sailing season is due to start in 8 weeks on Sunday 31 March and whilst we have an excellent new slipway our dinghy park is unusable for storing and moving boats on, and we have had no response to our repeated requests to meet with contractors and the Environment Agency to resolve the issues. 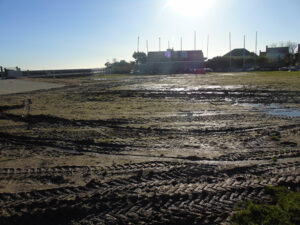