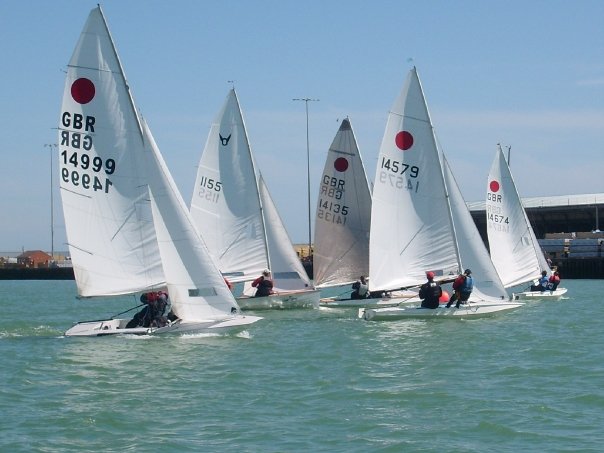 The Shoreham SC Fireball Open Meeting once again provided sparkling racing for a top quality fleet from as far afield as Plymouth, North Yorkshire and Belgium.

Saturday was set aside for a training session run by Tim Rush. His well planned on the water sessions and astute feedback session were very well received by visiting and club boats alike.

Sunday saw a variety of wind conditions, starting with a light north-westerly first race with plenty of significant wind shifts and place changing. After a delay whilst a building sea breeze settled in the race officer, Tyler Harmsworth was able to set a new course. The two following races included some exhilarating spinnaker reaches as the conditions became perfect for Fireball sailing – strong steady wind and waves. The day closed with Tom Gillard and Simon Potts leading the 21 boat field.

Monday dawned bright and sunny with a lighter south-westerly breeze than the previous day. Whilst not quite as spectacular as the previous day, the fleet enjoyed very close racing in marginal trapezing conditions. Some new faces made brief appearances at the front of the fleet as the event lead changed hands. At the end of the event the top four positions were occupied by helmsman who have won the Fireball World Championships (including the reigning champion). Overall standings were;

Race officer Tyler Harmsworth would like to make a specific note of thanks to Christian Birrell, John Shelton, Ian Knight and a wide range of assistants and support boat crews, ‘who’s the help and advise over the weekend made my life a lot easier’.