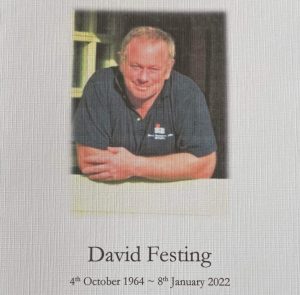 Former member David Festing passed away suddently on 8 January. We have been sent the eulogy below which was read at his funeral.

Anyone who had the pleasure of calling David a friend would probably be able to guess that there is sooooo much we could say, should incorporate and categorically should omit until a few scotches have been sunk!

So today we are taking the more traditional route, as I am sure he himself would wholly appreciate, and start at the very beginning… To whit, the 4th October 1964 when David, or ‘Animal Festing’ as some of you from school knew him, was born. One of 3 children born to Rae and Conrad, with Ginny being the oldest and Claire the youngest. His dad worked abroad a lot, so his mum took on the mantle of mother and father, walking that fine line between both parents, friend and confidante, which she did admirably. She was a strong, loving, independent and honourable mother, which may go some way to explaining why David always delighted in the company of likeminded women.

He cared for his sisters and was always protective of them, a trait that never left him his whole life, to look out for those he loved and cared about. They grew up in Hampstead, and as was typical of this era, their childhood was one of playing outside all day, with your friends, exploring, and only returning for your supper. It was here he met his friend Carrie, who is here today, and a lifelong friendship ensued.

He was mainly educated at UCS Frognal, which he enjoyed, especially on the rugby pitch for his school. and later for Rye Rugby Club. Even after leaving Rye, he always answered the call if they were a man short. He only stopped playing, albeit reluctantly, it has to be said, on most vociferously given medical advice. This passion for rugby never, ever left him. In 1975 the whole family spent a year in Karachi, in Pakistan when his dad was contracted to work there. They had a home in the suburbs. The children had an ayah and a chokidar, which is a guard for the house. David and Claire spent many delightful evenings in the company of their chokidar, his colleagues, listening to them chat, sharing their food, when the fruit vendor arrived, on his horse and cart, he would always stop and hand them all apiece of fruit.

Most long school holidays they got to travel, to see Conrad wherever he was at that time, Pakistan, it could be either Delhi in India, where, ‘yes, they did get to see The Taj Mahal or to Mumbai; also, to the UAE. They immersed themselves in the culture and as a result, all of them gained an understanding and respect for traditions that differed from one’s own… but left David with a pathological hatred of flying!

On leaving school, David went on to get a HND in engineering. A wise career choice, as some of you maybe aware, he loved all things mechanical, could tinker under a bonnet, beneath a car for not just hours, but DAAAYS! His first ever car was an aubergine Mini Cooper, he named Fifi. His friends would happily pile into it and go off with him, and upon arriving at their destination, Fifi bore no small resemblance to a clown’s car, so many friends would exit from it! He also loved his Ginetta, Gilberns, Davrian and Lotus.

He was happiest dismantling vehicles, taking engines apart and putting it all back together. Often, one would find these same parts strewn across a floor, upon a kitchen table or just be blocking a hallway. Whether it proved to be a wholly successful endeavour, well, that may have been part of the attraction for David, the suspense, not knowing until the key was turned.

David’s biggest desire though was to join the Army. He applied and was accepted in 1984 as a soldier into 5th Battalion, The Queens Regiment and commissioned in 1987. He would go on to gain the rank of Major. At Guildford TA Centre he was chosen to lead the marching of the Remembrance Parade, an honour and a truly proud moment for him.

In 1991 he was offered a short service limited commission with 3 Queens, serving in Northern Ireland and then Cyprus. It was here he met Brennan and later introduced him to his sister, Claire, which I am sure you are all aware, turned out rather splendidly. After this he went back to 5 Queens, which then became The Princess of Wales’s Royal Regiment, and got to meet Diana, The Princess of Wales when she presented the new colours. He also got to include his mum and Claire at this memorable event. David absolutely loved all his time in the army and all the friends he made.

Whilst he served in the TA, he worked full time, including at Accura Tool, with Tommo, who is here today, at Gearings, he worked as a broker for a number of years, then ran his own small business, which he loved doing, and also for Kent Police. When Covid started he got a job at one of the testing centres too.

In the autumn of 1995 David realised he needed a ‘plus one’ to attend a Ladies Regimental dinner evening. Can you see where this is going??

His good friend from the regiment, Gary and his partner, Caroline, suggested he ask one of Caroline’s friends to accompany him. This lady in question really, and I mean really, wanted to attend a mess ball… Have you guessed who it is yet?

So, Karen, as it was she, got to go to the ball, and David had a lady to accompany him. At the ball, once the formality of the meal had passed, Caroline suggested to David he ask Karen to dance, which he did. On the dance floor they really got chatting, found they had much in common and genuinely enjoyed each other’s company. To be fair to David, as first dates go, he absolutely knocked it out of the park!!
David was then sent on exercise with the TA, for a fortnight. Upon returning home he found a thank you card from Karen. He contacted Karen, jumped in his car and went straight over to see her, arriving filthy, covered in mud, and upon seeing her, uttered the unforgettable line, ‘May I please use your bath’!!

A month later he was feeling very poorly… could even have been something as acute as man flu…Karen suggested he come over to her house in Crawley, where she could look after him, and he never went home! In 1998 they bought a place together in East Malling and promptly introduced themselves to their neighbour, Sarah, (who is here today), aka The Duchess, who in turn would christen them ‘The Neighbours From Hell’! They became great friends, David would often pop round, when Karen was working late, and when Sarah needed help with something, such as breaking into her cottage when she had forgotten her key, David was her cat burglar of choice! Sarah attended their wedding when they got married in 2000 at St Mary’s Church in Rye and when she and Stephen got married in Scotland, Karen and David were delighted to go and were absolutely overjoyed when it transpired they were seated on the ‘gregarious guests table’, or as Sarah, ‘The Duchess’ put it ‘the naughty table’.

Shortly after their wedding, David introduced Karen to one of his friends as his ‘w.., his w…, this is Karen, my w…’ Karen knew he loved her, completely, but realised that he needed a bit of time for his brain to process what his heart knew. So, it was about a year later they decided to have a 2nd honeymoon, one where he happily declared to all and sundry ‘This is, Karen, my WIFE.’ And what a honeymoon it was. They drove to Italy, staying just outside Rome, for a 3 weeks sailing trip, and Karen got to experience the joys of fireball sailing for the first time; She became hooked. En route to Rome they stopped off in Dijon and Pisa. It was in Pisa that they had one of their most unforgettable evenings ever. They met up with a stag do, all of whom were part of a ballet company. The groom-to-be was dressed in tweed, every other man was in a black leotard and tights, accessorised with either a pink or orange sash. They never did find out whether there was any significance to the chosen colour of sash! David was chatting away to them all, making friends and was even more thrilled when these leotard wearing ballet company men then all joyously started singing rugby songs. He sent 2 bottles of wine to them, which were gratefully received. They sent a bottle of limoncello over to Karen and David. It would be fair to say that a great evening was had by all and there were a few fragile heads the next morning.

They travelled extensively, going to Nepal to meet up with their friends Giles and Jane, visiting the foothills of the Himalayas. For sailing events they went to France, Barbados, and Italy, where they were competing with Olympic sailors, and Karen said they were very much ‘bronze fleet’. They actually managed to finish one of the races in the top 50 and were greatly heartened by the cheering and whoops of delight from their fellow competitors. David and Karen were genuinely delighted just to be there, amongst friends, enjoying their company.

After his heart attack, David’s health started deteriorating. He still loved socialising and visiting his family. When he was working with Tommo, he sometimes would stay with Rae and got to spend more time with his nephew Sam who was staying at Rae’s, during a gap year. He loved his nieces and nephew and his god-children, but when Sam decided to go to Sandhurst, this resonated with David, he was so proud that a member of his family was going into the military.

This delightful, kind, engaging man passed away suddenly on 8th January. He was a larger-than-life character, fiercely loyal, one who truly understood what was important in life.

He will be greatly missed by more people than he ever would have imagined.